Karen Dale
Macclesfield, Cheshire, United Kingdom
Account Manager in Advertising and Marketing Currently living in the beautiful Cheshire town of Macclesfield. I spend as much time as I can hiking, biking and camping, my passions are good design and photography and am never without my beloved camera.

So after watching an art director  ( who i should say is on a diet since Christmas) eating a chow mein pot noodle for his lunch, I started wondering about Pot Noodles latest ad campaign, and that i wasn't aware there was one - in fact I couldn't remember how long ago it was since their last campaign.

I don't often think about pot noodle -  not unless I've drank too much the night before and am in desperate need for that one artificial tasting, convenience food, that i can only just about manage to boil a kettle to make. But with the last run of TV adverts and print media campaign. I was surprised that the last time i ate a pot noodle ( student days) was possibly the last time i was aware of their advertising efforts.

The last campaign split opinion, and was controversial, quite rightly ( due to the use of somewhat racy language, that was more appropriate in Shameless than on billboards and prime time TV ad slots) It ran for some time until it had to be toned down for public consumption. But as I recall was praised by many in the industry - any publicity is good publicity after all!

But my question is, that is a controversial ad campaign as a strategy ever a long term plan? Pot Noodle recognized their brand positioning at the very least and by understanding  how customers interact with the brand and consume the product, they were able to talk to them in a way that they could identify with. Pot noodle - that dirty little secret, its ok to admit you use every now and then. The execution of the campaign was done in an easily identifiable way and fit with the brand perfectly - but as far as the controversial statements are concerned, they may have gone to far too quickly and burned out. The campaign didn't last  for an extended period and in my opinion the campaign fizzled out with nowhere to go and little opportunity to follow up. Whilst thinking about Pot noodle now for WAY too long, I wont be buying one for my tea, but i will however be keeping my eyes open for any signs of a new campaign strategy.

My first website....oh and a bit of flash.

So it’s been a while as I’ve been working on a few projects - one of them being a website for myself. http://www.littletoesphotography.co.uk/


But this reminded me of the first website a made for a photographer friend of Mine. It’s not a shining example of Web design, but I was so pleased when I finally got all the elements together and so I’m hoping that, once I’ve finished the coving in the hall and smashing the plaster of the chimney breast etc etc, that I will be back exploring web design again.

See.... its physically impossible now to write more than two sentences at a time!
Posted by Karen Dale at 06:33 No comments:

Well its been about 12 months since I started to blog and then I discovered Twitter, and the more I tweeted, the more I questioned what I had to say in more than 140 characters.
Posted by Karen Dale at 06:19 No comments:

Bringing back the dog

So watching the channels with adverts can be annoying, but every now and then a brand that you least expect, can surprise you. The last time I got truly excited about an ad was the Muller cow adverts, I seriously fell in love with that ad. But today I saw an ad that rivals my love. Dulux have really pulled this out of the bag. I blooming love it! the dog, the music from the programme from my childhood, the whole package...i now just need to buy the walls that i'm going to buy the paint to cover..... 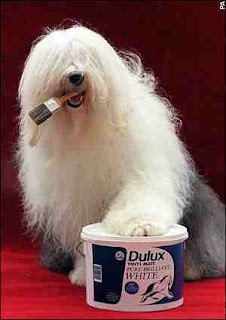 Battered and bruised as I am, I must say that Gisburn Forest  Mountain Bike trails on Sunday were AMAZING! We made the 90 or so minute trip to just north of Clitheroe, for what I was told were amazing trails. We rocked up and parked at the side of the road, no trail centre or even toilet block, the paths weren't advertised greatly and for that I was thankful.
We spent around 3 hours on the Red technical route and  hardly a soul passed us, the views were beautiful and the trail was very technical........ fun and bruises all round.
Posted by Karen Dale at 15:05 No comments: